Consider This Before You Buy Or Sell An Old Crib

As of June 28, 2011 all cribs manufactured and sold in the United States must comply with new and improved federal safety standards for overall crib safety. The requirements are outlined by the Consumer Product Safety Commission (CPSC) which is an independent agency of the US government. These requirements aren't limited to just new cribs though. They also apply to the resale of cribs, private and commercial. Does this mean that all cribs prior to that date are dangerous? Well, not necessarily. Unfortunately since not all the safety standards are design elements you can visibly make note of you can't accurately determine on your own if an old crib meets the new federal requirements.

What are the new crib requirements?

There are five criteria in the new federal requirements. The collection of these criteria means safer cribs.

Source: CPSC
The new requirements include...

The intent of an immoblizer is to prevent the drop-side from moving up and down, but the CPSC doesn't consider that an acceptable fix.

2. Wood slats must be made of strong wood to prevent breakage.

3. Crib hardware must have anti-loosening devices to keep it from coming loose or falling off/apart.

4. Mattress supports must be more durable.

5. Safety testing must be more rigorous.

So are any of these new requirements optional? Nope, not a chance. Cribs must meet all of the new criteria in order to be considered compliant. Trying to pass off a crib as being compliant when it really isn't is prohibited. If a person or company knowingly commits a prohibited act they're subject to possible civil penalties. In other words you could find yourself in a lot of legal trouble if you try to pass off a crib as being compliant with all of the latest safety standards. More importantly you could be risking the well being of someone's baby. No amount of profit is worth taking that chance.

What purpose do the new crib safety requirements serve?

Ok, so we know what the new requirements are but what's the reasoning behind each one of them being included? Let's take a look at each item in the same order they're listed above...

1. Unfortunately drop-side cribs have been linked to numerous deaths. In a four-year period, starting in 2007, there were 150 suffocation and strangulation deaths attributed to them. This is likely the reason the CPSC has elected to rule out immobilizers as a fix as well.

2. If slats are made of softer wood or thinly cut wood the chances of a slat being broken and removed increase. A missing slat could result in a space that's large enough for a head to fit in. That creates a potentially dangerous situation that could lead to asphyxia.

3. Another major cause of infant deaths was attributed to loose or missing hardware. By providing anti-loosening devices (i.e. lock washers, thread-locking fluid) it reduces the chance of hardware from becoming loose.

4. It's important that a newborn sleeps on a firm and level surface. If the support structure for the mattress is flimsy it could result in uneven firmness or a surface that isn't level. Both scenarios will make the crib an unsafe environment.

5. If manufacturers don't thoroughly test their cribs the chance of a poorly designed crib/component coming to market likely increases. This is why the CPSC requires that third-party testers be used. Consider this. If a couple decides they want four kids the crib they purchased for their first-born could be in use for eight years. That's a lot of rolling and jumping the crib needs to hold up to.

How can I tell if the new crib I purchase is compliant?

As we stated earlier you really cant tell if the crib you're about to purchase is compliant just by looking at it. Even if it's new and in the box it could have spent years sitting warehouse only to end up on the clearance shelf. To be certain the crib is compliant make sure it's 16 CFR 1219 compliant (the new standard for full-size cribs) or 16 CFR 1220 compliant (the new standard for non-full-size cribs). If you can't locate any labeling on the crib or in the manual stating it's compliant contact the manufacturer to find out. If you're not even sure who the manufacturer is you're probably best off looking for a new crib.
If you're baby is in the care of another person or business during the week you might want to make sure the crib your baby is sleeping in at that secondary location is safe as well. If you're baby is staying with another person they simply may not be aware of the new regulation standards. Child care centers on the other hand were mandated to have compliant cribs in place by December 28, 2012. Just because they were required to take action doesn't mean they did. It's worth a few minutes of your time you make sure your little one is sleeping in a safe environment.

Unfortunately your only option for the crib is to discard it since it likely doesn't meet all of the current federal requirements. In addition the CPSC recommends disassembling your crib before you discard it. A fully assembled crib sitting on the curb is an open invitation for some uninformed individual to take it home and start using it for their baby. You wouldn't knowingly put your own baby in an unsafe crib so why create the opportunity for someone else to do just that. As we stated earlier selling or donating a crib that doesn't meet the new crib standards could open the door to you possibly facing civil penalties or result in someone's baby using an unsafe crib. You don't want to find yourself in either of these two scenarios. 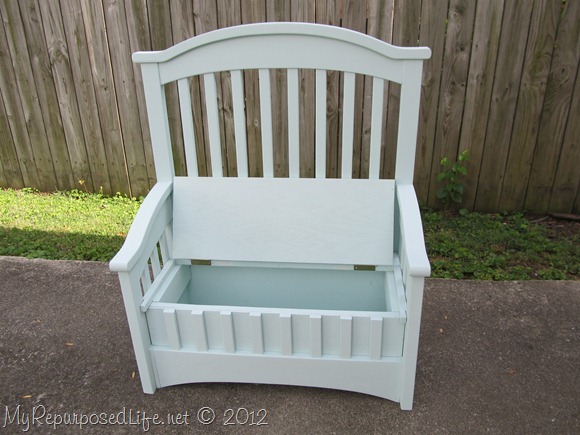 Alternatively if you're a creative individual and are good with your hands you could repurpose your old crib into a toy box, bench, or a toddler bed. That will give your old crib a second life and let it stick around a few more years perhaps even. There are lots of How To examples online of people doing just that. If you started with a well-made crib it probably has a pretty good chance of being repurposed.
< Back to the list | Previous Post | Next Post
Never miss a new post. Subscribe via email today and receive site updates.