How To Deal With Child Jealousy 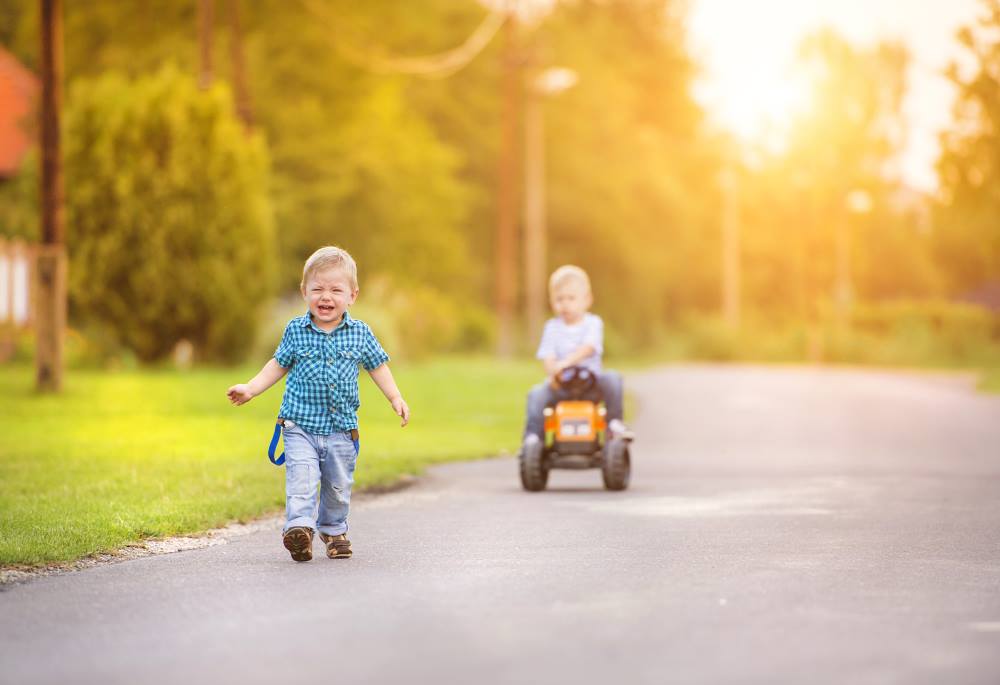 If you decide to have a second child you have the advantage of possessing all the knowledge you gained while raising your first-born. Having two kids is a totally different and new dynamic. Along with that new dynamic comes new experiences and new responsibilities. One of your new responsibilities is full-time referee. You have to keep the kids from killing one another (intentionally and unintentionally) as well as teach them to look out for each other. Some days will be easier than others but in the end it's totally worth it. The strong bond kids make with each other in their youth and the experiences they share will be remembered for a lifetime.
One of the unpleasant emotions that can arise between two individuals, especially little children, is jealousy. Jealousy definitely isn't a subtle emotion it's pretty intense. When little children are come over with jealousy they can act out suddenly and rashly. In our experience this often results in kids doing one of two things. Either they take something away from their sibling (i.e. a toy) or they go into attack mode and start hitting their sibling. In either case it's time to put that referee whistle to use.
Let's take a closer look at some of the aspects of jealousy in hopes of reducing it and better managing it when we're faced with it.

What are some common causes of jealousy?
Although this list isn't comprehensive it does touch on some of the more common causes of jealousy that we've seen between our two children whom are 3 years apart. Some of the items we've listed are probably universal while others might vary depending on the household. In any case being able to pinpoint what's causing the jealousy in your child's relationships can help you deal with future incidents of it.

Being able to provide everything your child needs and some of the things they want is great. We feel blessed that we're able to do this for our children. There are some dangers that come along with giving a child everything they want though. It can foster feelings of entitlement or expectations that every demand they make should be fulfilled. It could also result in them wanting everything they see other children in possession of and jealous when they don't have it.

It's human nature for us to make comparisons between things. From the weather today vs. yesterday to the meal we just ate vs. the previous meal. Most of those comparisons are internalized, fleeting and without much consequence. If you start to make comparisons between individuals that could lead to some detrimental consequences. Comparing one child's ability to another's could result in your child feeling inadequate or just plain jealous of their sibling.

Every child has a unique identity. From the way they look, the way they act and the things say. There's just no substituting one child for another. Depending on your individual likes, dislikes, gender and personality you might feel a stronger connection to one of your children. I think it's normal for people to feel that way which is what leads us to relate better to certain people and what also leads us to avoid others. If you start favoring one of your children this could lead to some jealousy. Kids are smart and very perceptive so they'll recognize favoring when it's happening and especially if it's to the advantage of their sibling.

Is there a child on earth that doesn't like opening presents and getting new toys? Certainly none of our children qualify for that. They love openings presents even when the presents aren't for them. It's common for children to feel just a little bit jealous on their sibling's birthday. Watching a sibling tare into gifts just isn't as exciting as opening gifts on their own. Watching their sibling blow out the birthday candles just isn't as fun as doing it themselves either.

If you have two or more kids there's eventually going to come a time where your older child gets to do something or have something that isn't age appropriate for their younger sibling. Case in point our first grade son gets to ride the bus but his younger sister who's only in preschool can't ride the bus. Fortunately for us our daughter took this age difference in stride but that isn't always the case. Age difference can at times lead to some jealousy.

Kids love to compete with each other. That's an overall good thing because we have to compete with people throughout or life even though it might not seem that way. Unfortunately kids sometimes take things too far. Not only can they be sore losers but they can also be ungracious winners. If winning every competition starts to become a life or death matter you could find the runner-up getting rather jealous of the first place finisher.

What are some potential long-term dangers of jealousy?
Jealousy is an inevitable emotion your children are going to come face to face with. That's ok. They're human just like everyone else and adults have their struggles with jealousy from time to time too. There's some potential long-term dangers though if the emotion goes unchecked. Jealousy, like some other emotions (i.e. fear), can take root and become a cornerstone of your personality. Here are some of the negative ways jealousy might manifest if it goes unchecked.

If a child is continuously jealous of what others get to experience or have in their possession they'll tend to focus on the things they're missing out on. This might lead to a child to continually feeling down or worth less because they don't have that thing in their life. Both of these emotions can weigh down on a child self esteem.

Setting a goal to achieve or attain something is good. It's a way to focus your energy over an extended period of time that will increase the chances of you reaching your goal. If jealousy has taken hold reaching the end goal might seem like a life or death matter. The added stress children put on themselves to reach a goal might have them cutting corners or outright cheating.

Since jealousy often manifests itself into physical things someone that's jealous all the time will put more importance on material stuff instead of the truly important things, people. This could result in a lot of damaged relationships later on in life and cause someone to value the wrong things.

If your child is jealous all the time eventually you're going to have to tell them "No" to one of their requests, even if you are a little guilty of spoiling them. Hearing that unfamiliar "No" could foster some intense feelings of resentment towards the parents.

If a child can't get their hands on something that's the focus of their jealousy they might feel the need to take matters into their own hands. This can sometimes lead to continually taking things by force from a sibling or friend. This kind of habit can become self-feeding because if a child gets away with doing it there's positive reinforcement of bad behavior.

If you can teach your child how to share the things they have with others and teach them how to ask another child if they can share their things it will help satisfy some of their impulsive desires. What they'll hopefully learn is that they don't need to own everything in order to enjoy it and when they share their stuff with others there's more for everyone to enjoy.

As parents we know there are going to be times where it's really hard to tell your child "No". Maybe it's because they've been on their best behavior or maybe it's because you've had a very long/tough day and you don't have the energy for a battle. In any case giving into behavior that's the result of jealousy is just encouraging more of the same behavior down the road. It might seem easy and harmless to give into but you're probably just creating more trouble for yourself and your child down the road.

Jealousy can evolve into a bottomless pit that will never be filled. It's important to focus your child's attention to what makes them unique and what they already have. The more time they spend dwelling on that the less time they have to think about the stuff they don't have.

Avoid making direct comparisons between your child's behavior, school work or appearance and another sibling/child. People love to make comparisons so if you still feel the need to do it don't do it right in front of your child. Attaching a negative sentiment onto something a child is or isn't could diminish their feelings of self worth and foster feelings of jealousy towards the other sibling/child that's found in favor of.

Our final take.
Your child will be faced with the emotion of jealousy at some point. Taking some proactive steps to confront this emotion head on will help your child deal with it constructively rather than let it take root. Keeping jealousy in check will help your child keep material things and their personal relationships in proper perspective.
< Back to the list | Previous Post | Next Post
Never miss a new post. Subscribe via email today and receive site updates.